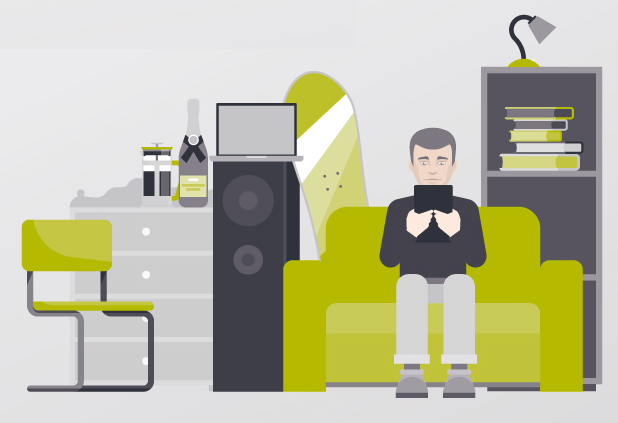 Peak online spending coincides with prime TV time (8pm to 11pm). This has been shown by our current customer journey analysis which examined around 1.2 million online purchases from eleven sectors (including fashion, travel, electronics) between 1st April and 20th June 2015. Webshops not only register more traffic during prime time but also the best conversion rate and above-average order sizes. E-commerce therefore shares its peak revenue generating periods with TV prime time. The use of mobile end-devices such as smartphones and tablets is also disproportionately stronger during prime time. They account for around 40% of traffic and one quarter of all conversions.

“Online marketers need to know how buyer behaviour changes throughout the day in order to distribute their budget across the individual channels and tailor their advertising to relevant requirements in the buying process.” says Thilo Heller, CMO at intelliAd Media. “Additional optimisation can be achieved by using Cross-Device Tracking to investigate the role played by smartphones and tablets for a given market and its products” adds Heller. According to the analysis, traffic experienced by web shops through all end devices (desktop, tablet and smartphone) between 8pm and 11pm is 57% higher than the daily average. The conversion rate reaches its maximum during this period (2.3% on average) and 69% more money is spent per hour during prime time than the daily average. The average shopping order value in online retail is 94€ during prime time (except the travel sector in which 766€ per booking is spent). Consumers also reach decisions the quickest during prime time: 35% of purchases are finalised in less than an hour compared to the daily average of 33%.

The largest share of traffic (61%) and conversions (77%) is still observed on desktop computers during prime time. However, tablets and smartphones steal a significant share away from PCs between 8pm and 11pm – compared to the rest of the day the share of conversions on smartphones is some 17% higher, that of tablets is an incredible 39% higher. “The reason for the increased number of users who surf online during prime with tablets or smartphones lies in the second screen phenomenon. TV advertising and its stimulus effects sets off a spike in online search queries” explains Thilo Heller, CMO at intelliAd Media. “The mission then is to immediately turn this increased buying interest into conversions. We recommend using TV Triggering for this purpose which increases your advertising pressure in real time, both when your own advertisements are broadcast and those of your competition. This routes traffic onto your own website.